The world is full of interesting things to be discovered, learned, practiced. As one searches for new input, seeing what others are doing can be a source of inspiration, and advice from someone already into a specific thing can be of great help. Therefore I’d like to share what keeps me moving, learning, living and offer hints and resources for the potentially interested.

Apart from what’s shown here, be sure to also check out the webring linked at in the footer of the page.

Prepare to face three different, partly redundant, simultaneously used scripts; characters made up of more than 20 strokes — whose order you have to get right btw. — with various ways to read and interpret them depending on their current context; and over 30 common, individual ways to count things, each associated with a group of things it’s used for.

On the other hand pronunciation is super consistent (looking at you, English), grammar is totally manageable and there are awesome things like the word for “influence”, 「影響」, being written with the characters for “shadow” and “resonance”; or “strategy”, 「戦略」, with “battle” and “shortcut”. Also, the word for “crowd of people”, 「人混み」, has the same pronunciation as “people garbage”.

Appetizer: NativLang’s three part series on writing Japanese
“It’s the most bizzarly complicated writing system within a system ever devised by humankind.”

‌
My personal Japanese progress has it’s own place in the projects section.

“Recontextualizing public urban space as a playground instead of something merely functional.” (Source)

Just look for people in your area doing parkour. In my experience such groups are extremely supportive towards newcomers. If you can’t find anyone to train with, start on your own — you might find followers soon. :D

To get an idea of what parkour is, watch People in Motion. tl;dw: it’s playing with one’s environment by moving around.

Karuta is a Japanese loanword originally from Portuguese (“carta”) and a term used to describe several types of Japanese card games. A particularly interesting group of aforementioned is called uta-garuta and often based on the poem collection Ogura Hyakunin Isshu by Fujiwara no Teika. Kyōgi karuta is the competitive version of uta-garuta.

If you want to get an overview of karuta-type games and more detailed information feel free to have a look at this info page I created. A brief peak into kyōgi karuta right here:

An English version of the rules of kyōgi karuta can be found here. Further useful resources:

To get an idea of how kyōgi karuta looks like:
Highlights from the 2014 championship final

‌
A fun way to learn more about the world of karuta would be reading the manga Chihayafuru or watching the anime adaptaion.

Giving penspinning a try couldn’t be easier. Grab a more or less balanced pen, look at a video tutorial online and practice — that’s it.
It is, of course, more fun when you also get involved with the community. The largest international board on the topic of penspinning that I know of appears to have gone inactive. Most contries also have their own board/community. Try to look out for gatherings. It’s most fun when you meet other spinners in person and talk to them. :)

I, personally, started penspinning in 2007 and actively pursued it — i.e. took my time to practice, look out for new tricks to learn, etc. — for maybe a year and a half. After that it’s been casual ever since. I barely try or practice new stuff … but it’s still a lot of fun to doing it and I don’t plan to stop. :)

Some of my recordings

Ever since the podcast Hello Internet popped into existence CGP Grey seems to me like a figure to aspire to with regard to self-management but … I’m not an Apple user, so no OmniFocus for me. Jests aside, here’s some relevant stuff:

In order to organize information I use gitit. Reasons: Markdown, subfolders, MathJax, git based.

Anki — ever since I set out to learn 2000+ Japanese characters. Have something that you’d like to memorize efficiently and forever? SRS!

Most keyboards today are so called rubber dome or scissor switch keyboards. They’re cheap to produce and do their job. There are, however, other types of keyboards which in general are referred to as mechanical keyboards.

The exact mechanisms of how mechanical keyboard switches work differ from each other. In most cases the switches of one vendor have colored stems which give them their name and indicate their tactile and acoustic behaviour. More information can be found in the deskthority wiki.
The reason for most people to use a mechanical keyboard is the higher quality and durability, the fact that you can choose a swich type that fits your “taste” the best and generally the more comfortable feeling when typing. If you’re interested in the topic be sure to check out deskthority.net, /r/MechanicalKeyboards and geekhack.org.

Personally I use a Vortex CORE with Cherry MX Blue switches and before that in reverse chronological order used a KBC Poker (MX Blues), Leopold FC500RT/AB (MX Browns) and a SteelSeries 7G (MX Blacks).

To get an idea of what it is about, watch Crack The Surface - Episode I and Episode II.
In short, it is the exploration of man-made stuff. Objects of interest vary as much as reasons to do it I guess. For me, personally, it’s about adventure, appreciation and to some extend photography. Sadly though, I only very rarely got around to do it so far. 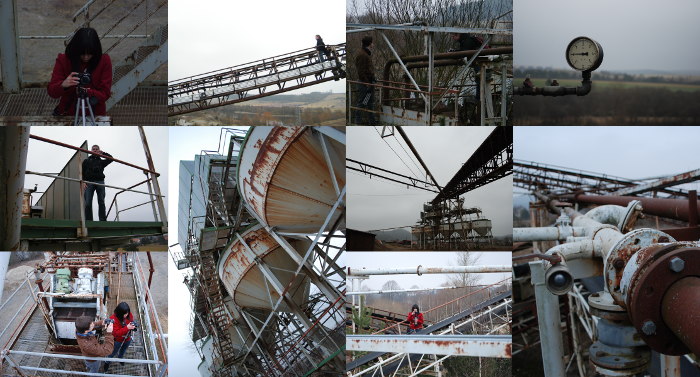 For a written intro into lock picking take a look at the MIT Guide to Lock Picking. If you prefer video, a great starting point is Schuyler Towne’s video series Locks: Basic operation and manipulation.
Further places to look for interesting content include TOOOL (The Open Organisation Of Lockpickers), /r/lockpicking and the DEF CON Media Archives Portal, where you can find a lot of recorded talks on the subject of lock picking and physical security in general.

As far as I can tell the places to go to for speedrunning content are the Speed Demos Archive and Speed­Runs­Live. If you want to get a general idea of what a speedrun is and what a speedrunner does, take a look at Portal Done Pro and the Portal Done Pro - Commentary Video. Note that this run does not comply with the rules of SDA and is not listed there. Nonetheless does it give a nice glimpse into the world of speedrunning. A very entertaining way to learn a bit more can be following one of SDA’s marathons, where a group of speedrunners plays through a ton of games throughout several days. Most of them comment on what they are doing while playing, so you get an insight into what the key techniques are for running a particular game.

Apart from speedruns gathered at SDA, there are also runs called TAS — tool-assisted speedruns. I don’t know a lot about them, but I guess TASVideos is a good resource to start with.

I myself never did serious speedrunning. Casual (and old) stuff:

Maybe not a hobby in the traditional sense, but something I would like people to be more aware of and where I try to lead by example. Use (and thereby spread) stuff that is permissively licensed (e.g. muisc), buy DRM free whenever possible, release under permissive licenses yourself.

If you haven’t seen it yet, watch Everything is a Remix. Further down some very specific realms of remix culture.

Not only what brought the concept of drifting trains into this world, but also a nice example especially worth highlighting to western audiences of a healthy, living remix culture that is not being held back by ignorant backfiring corporate efforts.

“Doujinshi is […] like celebration, an ongoing fan party. […] in America, grumpy rights holding companies shut down the party by calling the cops. In Japan, companies let the music play because they realize the party’s in their honor.” — Tofugu

Also: Copyright and Comics in Japan: Does Law Explain Why All the Cartoons My Kid Watches are Japanese Imports?

No connection to licensing and legality here. Just fun content if it’s your cup of tea. Quality AMV sources: amvnews.ru and the Recommended AMVs subforum on animemusicvideos.org.

Stuff that I was into, want to get into, am into but lack usable content to present or motiavtion to create a section for, is represented somewhere else on the site, etc.